Youth SSVP- Protagonists of the present and future of the SSVP! 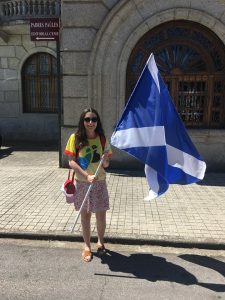 The 2nd ever International Youth SSVP meeting was held this past weekend in Salamanca in Spain.

Hannah O’Neill, Youth SSVP member from the Paisley Ozanam Club, was delighted to represent SSVP Scotland at this international meeting.

Bro. Renato reiterated the support of the International Council General for the works, projects and initiatives of the youth members of the Society, telling them to;

“Be creative, inspire many other young people to join the Conferences of the Society, be the leaders that the SSVP is looking for, and be zealous about all that you are going to do.”

The meeting, which was held from the 16th to the 21st, was held in the Centre of Spirituality of the Congregation of the Mission(Vincentian Fathers) and the theme of the meeting was;