A trip to India

For many months and after lots of research I felt compelled to travel to India to witness first-hand the extreme levels of social oppression and discrimination which are present due to the caste system. India’s caste system was founded by the Hindu religion, dividing India’s population into four main categories. The practice of this system means that 200 million people in India are low-caste Dalit’s, also known as ‘untouchables’. These people are treated like second class human beings and are subject to discrimination and social oppression throughout every apect of their lives. Unfortunately, due to political corruption the problems that 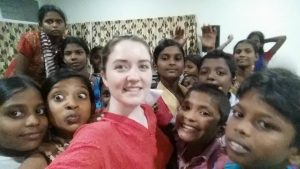 the Dalit communities face are unlikely to be resolved any time soon. All of this research opened my eyes to the extreme levels of poverty which I may witness during my trip. Despite my expectations I was still left shocked by many of the situations which I found myself in. Quickly after arriving I also realised that there was far more to this country than one could ever expect to learn about in 4 weeks.

My four-week trip began in the city of Chennai, before travelling 6 hours to a city called Thanjavur in Tamil Nadu, Southern India. During my 3 week stay here I was working directly with religious priests and nuns who had organised a three-week summer camp for the Dalit village kids throughout the state. The religious I worked with were Dalit’s themselves and therefore knew the first hand struggles of their caste and of the children who were in attendance. It was my responsibility to teach English to the 37 children during their time at camp. They were
between the ages of 9 to 15 and each child was chosen specifically by a priest or nun in their area to benefit from this opportunity. They will then be sponsored for further education by other benefactors who will help to pay for the child’s schooling and accommodation for the academic year. By receiving this funding the 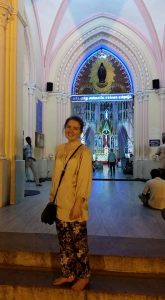 se children will get the opportunity to leave their villages, and the poverty they
face there, behind for a better future. It is hoped that the three-week experience at camp will help to empower these children through education as well as teaching them discipline, motivation and lifelong skills.

As well as visiting many Hindu temples, where I learned a lot about how the caste system began. I also got the opportunity to visit some of the Dalit villages where the children live. This was an eye opening experience that helped me to relate to the children on a deeper level, after seeing first-hand the hardship which they and their families have to face on a daily basis. I then got the opportunity to visit government hospitals, nursing homes, orphanages and prisons throughout my short three week stay. Each of these showed another level of the oppression and political marginalisation which is practiced throughout this unjust society. It is clear that with the current political leaders and the hierarchical discrimination of the caste system that there is a long road to travel before India’s lowest caste population will be able to experience a life where people respect their basic human rights.My fourth week was then spent in Bangalore where I stayed with The Missionary Sisters of Peter Claver. This was a completely different experience and somewhat relaxing in comparison to the previous weeks. Despite being in a different state, the poverty and injustice was still evident. Throughout the city there are many religious that work to provide education and hostels for lower caste children, to give them a stepping stone out of poverty. There are also many clinics and day care centres which work tirelessly in local villages to provide health care and health education to the surrounding poor villages.

Due to the generosity of everyone at St Augustine’s, I was able to take many resources over to India for the children at camp to benefit from. Each item they received was accepted with sheer joy and appreciation. They wore their miraculous medals around their necks with pride and cherished their reading books like a piece of treasure. On the final day of camp, the parents of each child came for an open day to see what the children had been working on. Many tears were shed at the sight of the children performing traditional Indian dances or playing the organ. Many of the parents then rejoiced when they heard that their child could communicate in English. I desperately hope that their experience here will be a catalyst for them to achieve a bright future and escape the endless road of poverty which they are on. Together, with your generosity, we were able to give these children gifts which they will cherish forever and will be a constant reminder of where their journey started.

I cannot begin to thank everyone enough for your continual prayers and support throughout my journey. I urge you to continue to pray for the 200 million Dalit people who are subject to poverty and discrimination in ways that we would struggle to comprehend.

Lucy is now back living in Scotland and is working for Mary’s Meals. She is a member of St Augustine’s Parish SSVP Conference in Coatbridge.