New Lyrics to be Penned in Contest 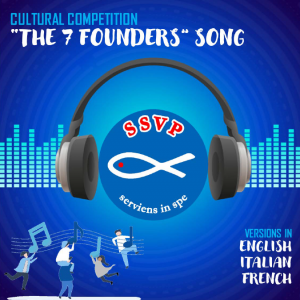 “In 2019, the Council General International (CGI) of the Society of Saint Vincent de Paul  celebrated 180 years of its existence. At the Annual Assembly, held in Oporto, Portugal, “The Seven Founders” song was officially launched, in its Portuguese version.

The words and music were composed by the SSVP member Paulo César Felizardo da Silva, from  Brazil. The Spanish version, promoted by the National Council of Spain, was also launched then.  The Spanish lyric was written by Juan Tirado, of SSVP Spain.

The words of this song praise the main characteristics of those “seven friends from Paris, brave  young men” who founded and brought to life the Society of Saint Vincent de Paul.

At our request, the International Youth Committee is officially launching the cultural competition for “The Seven Founders Song” for the version in English, French and Italian.

With this cultural competition, the Council General hopes to arouse even more interest in the  importance of the Collegiate Foundation, which marked the creation of our beloved Society  of Saint Vincent de Paul, and also to praise the Vincentian charism of the seven founders of the  SSVP.

They were the forerunners of what is today an organisation present in over 150 countries, with  some 800,000 members who help around 30 million people living in poverty and social  vulnerability. Let us hope that many Vincentians take part in this competition!”