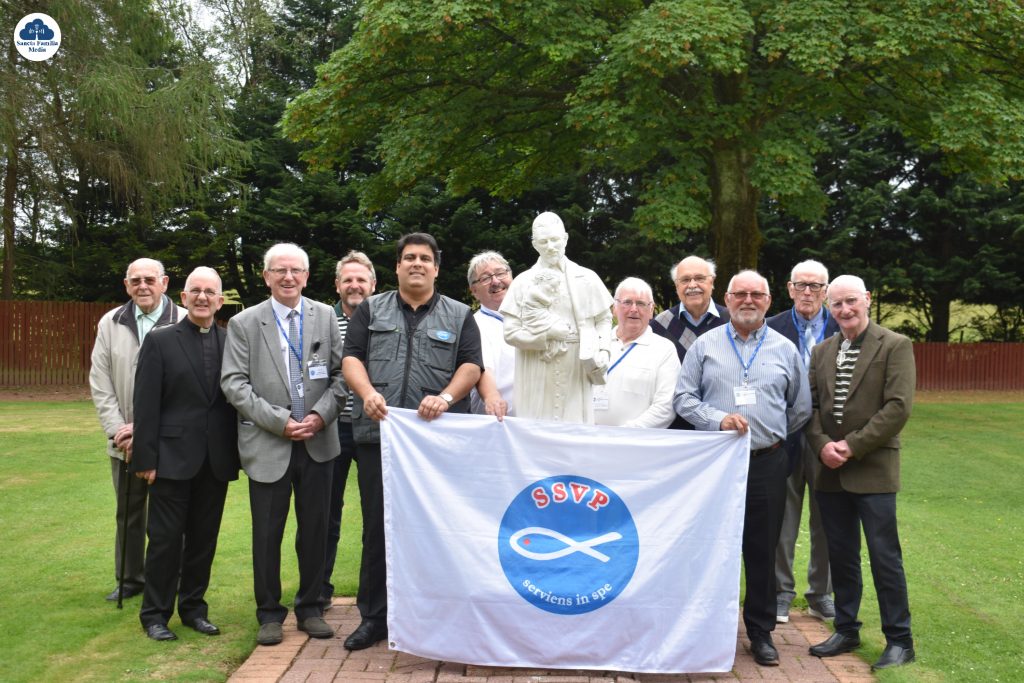 It was five days of many activities with visits, lectures and celebrations.

The national president is brother Daniel Collins. He and a delegation of local Vincentians accompanied me June 21-25, 2022, on visits to three cities: Edinburgh (the capital), Glasgow and Motherwell. I also had the pleasant company of brother Laszlo Konczol (from Germany), our Territorial Vice-president for Europe 1.

We participated every day in Holy Masses celebrated by bishops and archbishops, the last one in Edinburgh. It was a very special mass because we commemorated the 175 years of the arrival of the SSVP on Scottish soil, in St. Patrick’s Church, only 12 years after the foundation of the first Conference of charity in Paris. On the occasion, a beautiful plaque commemorating the 175th anniversary was unveiled.

I was very impressed by the religious fervour of the Scottish Vincentians, endowed with great spirituality, compassion and empathy for those who suffer. They truly know that the “poor” are all of us, not only those lacking material goods.

Upon arrival at one of the parishes in Motherwell, we were greeted by a traditional Scottish bagpipe performance.

We visited the headquarters of the National Council in Glasgow, where we presented the local SSVP with a relic of Blessed Ozanam. We had a meeting with Vincentian leaders, guests and priests in Edinburgh, where I gave a talk about the achievements of the Council General in the last six years.

Everywhere I went I promoted the official image of the “Seven Founders” of our Society, presenting conferences and councils with a beautiful picture (board) of the founding fathers. I also distributed copies of the CGI’s five-year report, and everyone was impressed with the worldwide results achieved by the SSVP, even during the pandemic restrictions.

I visited four conferences, one exclusively dedicated to the deaf of Motherwell. I also had the privilege of meeting brother Vincent Lamour who is 100 years old with 60 years dedicated to charity. It was a moment of great emotion for me.

I also had great joy when I participated in an event with 8 Mini-conferences, formed by future brothers & sisters aged 8 and 15 years old, students at Catholic schools that are partners of the SSVP. We also visited two social works of the SSVP (“Ozanam Centre” and “Furniture Unit”) and two other social projects of the Daughters of Charity (“Louise Project” and “Saint Joseph’s Services”).

We were accompanied in all the activities by Thomas and Brian, from “Sancta Familia Media”, responsible for the journalistic and photographic coverage of our visit. All the videos and pictures of our visit are on Facebook (www.facebook.com/SSVPScot). Also the national spiritual adviser, Sister Maria Robb (Daughters of Charity), was present at all the events.

We visited the Parliament and were received by SMP Angela Constante who was very happy with the social, spiritual and humanitarian action taken by SSVP Scotland.

I would like to make a special mention to brother Daniel Collins, National President, for the simplicity, dedication and servant leadership with which he leads SSVP Scotland. I learned a lot from him during the visit. My regards to brother Richard Steinbach (president of the Central Council of St Andrews and Edinburgh) and to brother Haydn Pollock, who was our “driver general”. Many thanks to Scotland for the wonderful days I spent there.

Check out, below, the daily videos made as a summary of the developed activities:

Read the interview given to the magazine “Scottish Catholic” – July 1, 2022

More details will be published in issue #2 of our Digital Magazine “Ozanam Network” in four languages, and on the social media of the Council General and the National Council.