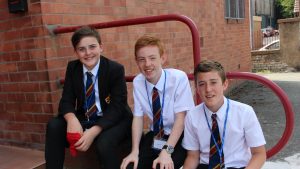 New and existing Youth SSVP members from across the country recently gathered to celebrate the Year of Mercy. 70 pupils came together with their teachers and SSVP members at St Bride’s Hall in Motherwell. The day was planned and led by a group of young adult SSVP members and volunteers  from around the country and the participants enjoyed a mixture of games, discussion,workshops and prayer.

After getting to know one another better, groups learned more about ‘Two Feet of Love in Action’ and were challenged to consider how they could help people in need not only through direct assistance and charity, but also how they could stop people from being in need- working for social justice in other words.

Group were then asked to consider the principles of the ‘Stick Your Labels’ campaign, a Poverty Alliance led initiative which challenges the language used to describe people living in poverty. Lively discussion took place and great ideas were put fo

Other than the final reflection which was held in Our Lady of Good Aid Cathedral, the afternoon was given over to fun, with e Out of Here’ being the focus.  A quiz with a difference! All took part wholeheartedly and were more than willing to undergo the gentle forfeits which had to be ensured for having the least points in each round. ‘I’m a Vinnie Get M

SSVP Scotland would like to thank everyone who helped to make this first National Youth Day possible, including Monsignor Miller and Dorothy Daly at the Cathedral, the teachers who took time to organise to bring their pupils along, the pupils who jumped in to every activity without question and most importantly our wonderful young adult group leaders-   Amy, Catherine, Colette, Sarah, Sean, Matthew, Maura, Nicole and  Sean- who are all complete legends!