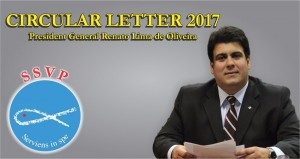 On January 31st 2017, brother Renato Lima de Oliveira, 16thPresident General of the Society of Saint Vincent de Paul, issued his first Circular Letter which is the means by which President Generals have traditionally communicated directly with members of the Society, beloved members of Conferences, throughout the world. Because of its length, it is suggested that the Circular Letter be divided into two or three parts, each of which could form the basis for a reflection at Conference meetings.

This is the first time in the history of the Society that a Circular Letter is written in Arabic, Italian and Chinese as well as our four official languages (English, French, Spanish and Portuguese). President Renato said: “I am very happy to revive the use of Circular Letters from the President General which is a great means of addressing Vincentians around the world and inviting them to reflect on key topics”.